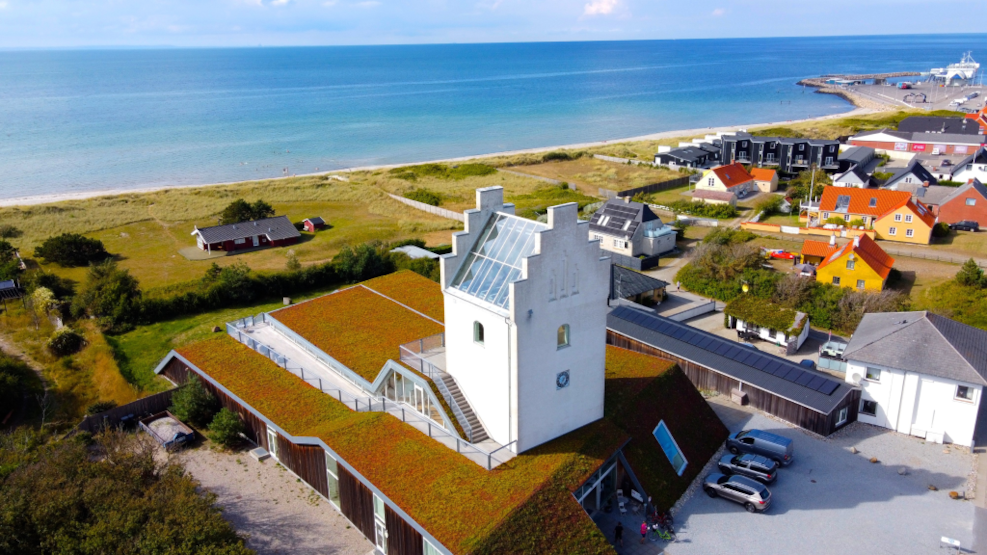 Out in the middle of Kattegat, Læsø appears on the horizon and the first landfall is the church tower. In the shelter of the tower, Læsø Kur spa resort is ready to indulge you and fill you with a feeling of well-being based on the island's salt, clay and sea algae. The centre is also the home of a Danish psoriasis centre.

From church to spa resort It began with a bright idea by salt-boiler Poul. One of the recognised ways of treating psoriasis is with saltwater. This has been done at the Dead Sea in Israel and in the Blue Lagoon on Iceland. Then why not try it on Læsø! Everyone mucked in and the economic basis for the business was established. Læsø Kur became a reality. On 6 August 2007 the conversion of the church began with the nave of the church being pulled down.

The church tower is preserved This is the church tower standing all alone waiting for the new building work to take place!A competition was held. The winner was the firm of architects Friis og Moltke in partnership with Trigon and Cowi A/S. The tower would remain a landmark, but with a new base that meandered like a stylised dune landscape. Thus the building is planted in the present with a view of both the past and the future.

Sold for 1 Danish krone On the first Sunday in Advent 2003 the church was taken out of service. Following discussions with the parish council in Vesterø and the Ministry of Ecclesiastical Affairs, it was decided that the church could be sold for the symbolic price of 1 Danish krone! It was the first time that a church in Denmark had been "sold" for private purposes.  The link between salt and church is actually nothing new. For several hundred years it was the Viborg chapter that owned Læsø and was behind the commercial exploitation of the salty groundwater.

Furniture and fixtures from the church According to rules and regulations, the communion silver and baptismal font were carried out when the church lost its status as a church. The church bell was carefully removed and now rings at Bangsbostrand Kirke in Frederikshavn. The pews were sold at an auction. Today one of them is in the breakfast room at Østergaard B&B