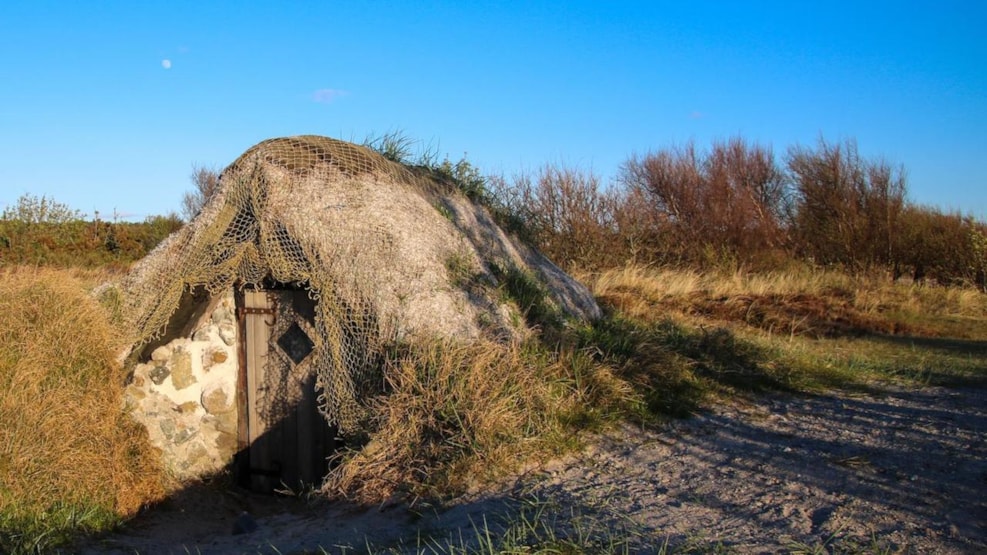 The lobster huts at Horneks Odde

At Hornek's Odde you can see the old lobster huts and be lucky to spot seals and birds. There is also an exhibition house, toilets and table/bench sets, and then there are two binoculars so you can clearly see the old lighthouse on Ndr. Rønner runs 6 km out.

In the early 1900s and up to approx. In 1950, there were 8-10 cabins on the north coast in Hornek, which the fishermen used as a base for fishing, especially for black lobster with tejner.
The huts were built from various materials that had been washed ashore, and with seaweed or rather eel grass on the roof. They usually contained one or two bunks, table, chair and a kettle to make coffee.
Today, there are two cabins left - Læsø Museum has the right to use one cabin, which is to the left of the car park. You are welcome to look inside - here is a small exhibition about nature, plants and animals.
Below the stone house, there are two binoculars from which you can be lucky to see seals and birds.

The story of the Hummerhytterne at Horneks Odde
Læsø Museum's manager Simon Kyhn-Madsen has written a little more about the Hummerhytterne for the Museum's annual report. Read it here:
If you go for a walk at Hornek's Headland on Læsø's north coast, approx. halfway between Vesterø Harbor and Østerby Harbor, you come across the island's last two lobster shacks. They date from the time when you rowed from tejne to tejne and had to spend the night at the mooring when it was in season. Sometimes for a whole week. The outboard motor later made it possible to go out fishing for black lobster and get home again the same day.
The first lobster shack was built by Thrane. Although he was "over", his cabin was soon joined by as many as 10 cabins, mainly built by "dune dwellers" and other Læsø residents who lived too far from Hornek to be able to get home at night. Today, only a slight indentation can be seen in the dunes from the other lobster huts - to the east and west along the headland.
The cabins were primitive and consisted of driftwood and leftover materials from the homestead. Stones from the beach were piled on top of each other in the excavated dune hole and stopped with seaweed, clay or cement, according to ability. On top of a wooden skeleton of old timber, Læsø's favorite roof covering at the time, eel grass, was laid. Inside the hut were a couple of bunks, lined with some straw and a quilt, a table and a bench. And if more seating was needed, an English fish box could easily fulfill that need.
Food and drink were also needed. Therefore, a tile was placed in a corner, and the pipe led directly up through the seaweed and out into the open. However, this custom was quickly changed after a few of the cabins went up in flames. The pipe got so hot that it ignited the otherwise difficult-to-ignite eel grass. The menu always consisted of the same: black coffee and smørrebrød. Both in the morning, before the boys were fired and when they got home. In the afternoon, when worms and fish for bait were caught. And when the day's work was done, and people gathered in the cabin to talk about something they had experienced themselves or heard others tell about.
The lobsters were transported by foot to Vesterø Harbor and sold, mainly to Vendsyssel Fiskeeksport in Frederikshavn. The fisherman had no influence on the price. You got what the company wanted to pay. And it was no bad business either; one man could earn around DKK 125 from June to September. And that was a nice profit in the 1910s - even after the black coffee and smørrebrød had been deducted from the accounts.
From the end of the 1960s onwards, the cabins have mainly been used as excursion destinations. However, it has not changed much in the appearance of the cabins, which still look like they did in the last century, when the immigrant Thrane built his lobster cabin.

Newly renovated lobster shack
Læsø Museum owns the one cabin, and it was put in place in 2021 thanks to, among other things, foundation funds. In connection with the renovation, some boards were made with the exciting stories from the area and the cabins. It was Anna Søe from Aarhus University who, in connection with her thesis, did research and created some boards that can now be experienced in the cabin. The picture shows Simon from Læsø Museum and Anna Søe.